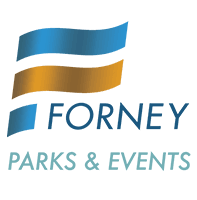 He graduated from Forney's Lewis High School in 1931 and received a Bachelor of Business Administration from the University of Texas in 1935.

Before Work War II, Mick worked as an accountant at the Southern Gas Company and Subsidiaries. 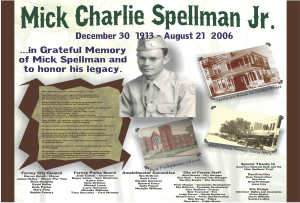 During the war, he enlisted in the Army Air Corps' and served from October 29, 1942 to September 23, 1945. He trained at Sheppard Field (Wichita Falls, Texas), Kearns Field (West Jordan, Utah), Seymour Johnston Field (Goldsboro, North Carolina), and served as a clerk in the African Theater in the 8th Air Depot Group.

After the war, he continued working for SUG until retiring in January of 1977 after 42 years with the company.

A devout Christian, Mick was a life-long member of the Forney Presbyterian Church.

He enjoyed working in his yard, reading, and traveling with his friend Florence Reagin.

His generous contributions to the City of Forney include renovation of the Latimer Playground at Mulberry Park, the construction of the Mick Spellman Park Building at Forney Community Park, and the Spellman Amphitheater.

We are forever grateful.